A Dime A Day

“My Sunday-best just isn’t good enough,” he says sullenly and looks off into the distance.

I hum, acknowledging that I hear him as I pick up a piece of broccoli between my splintering wooden chopsticks. I don’t know how to reply when he is in one of these lyrical moods, so I take a small bite and chew, swallow. Food feels funny slithering down my throat, like it shouldn’t be there. My eyes wander over to his carton of Lo Mein—it’s untouched. I instantly feel like vomiting so I set my food down. The tall streetlight above us shines a spotlight on our bench and I kind of feel like we’re in a play. A depressing, eventless sort of play that nobody wants to watch. Besides the two of us, the park is deserted.

I look to him and he is ready to cry.

This is what we like to call “Hobo Date Night”.

It’s a sweet idea, just a bit too ambitious. On what is basically a dime-a-day salary, it’s difficult to muster up twenty dollars every few months to eat out or go to the movies. I don’t know why we even bother because we inevitably make each other miserable on date nights. Something about this simple luxury is too much for us to handle. I think it has to do with the natural human tendency to freak out when thrown in the face of change.

Nevertheless, we both thought tonight would be different. We think this every night.

I look to him and he tries to smile.

When he smiles, he looks alien. His small green eyes get squinty under his thin eyebrows and the skin around his mouth crinkles. He’s stick thin and has death-camp cheek bones; he stands out in a crowd. Our friends call him Bones. I stare at his grimy flannel shirt and ripped jeans, the orange flop of unkempt hair on top of his head. A breeze sweeps past to tickle us and he shivers, trying to warm himself by hiding his ears behind his popped collar. He’s like a child.

I smile at him, but it’s not genuine. Tonight is supposed to be a celebration and he has ruined it with his eternal pessimism.

“I’m sorry,” he whispers and it creeps me out, because it’s as if he just read my thoughts. But I know he hasn’t; he’s no mind reader. If Bones is a mind-reader, then I’m God.

“For how this turned out.” He chews on his bottom lip. The skin is peeling off. “You know, if someone asked me last year, I would’ve said we’d be well on our way to becoming famous by now. But really, it’s just the opposite…it’s kind of funny.”

I scowl; it’s not funny on any level. It’s too true to be funny. The truth doesn’t make people laugh—the truth just hurts.
Last year, the only sleep I lost was over going to homecoming without a date.

Last year, I had a home and a family and friends with cars.
Last year, I thought I had a future.

Last year, I met Bones.
I remember why I found him attractive—he was tall and seventeen and played the guitar. We both fell, but not in love. Love is complex and we are but the simplest of simpletons. Rather, we fell into a state of musician’s bliss. It would be me, him, and his guitar until two in the morning, hours past our curfews. We thought we were the next Lennon-McCartney, a modern-day Page-Plant. Maybe we would have been…but contrary to our beliefs, we were not ever intended to be the next Buckingham-Nicks.

That was the big mistake, the nuclear bomb that iced the pretty vanilla cake: misinterpreting our musical compatibility as romance.
From the very first time he kissed me on the lips, it was like a downhill bicycle ride from the peak of Mount Everest—extremely fast and ill-fated since the beginning. It didn’t help that we both had a ridiculous “us against the world” mindset. There seemed to be no alternative when Bones took my hand and touched my fingers to his lips.

Now, what of our dreams? Tattered, just like the clothes on our backs. But we hold on to both, because that’s our natural human instinct. There’s always room for something when you’ve got nothing.
Standing on a street corner, he’ll play a few chords and I’ll sing a few bars. All for that dime some fat, spoiled, rich kid will toss into our money jar. It’s strange how people don’t ever get too close. When they want to tip us—whether it is out of pity or out of true appreciation of our music—their anxious eyes watch us carefully. Once their coins clink in the bottom of the glass container, they dart away as if they just avoided an encounter with a rabid dog. Do they think we’ll bite them? Eat them up, swallow them whole? We’re not that hungry.

I can’t help but feel resentful every once in a while. People used to tell me that I had the voice of an angel. Now they don’t want to listen to it. Where’s the sense in that?

I look to Bones, he sighs, and I sigh. He then takes my hand and squeezes it tight, which is something he never does anymore. I can feel his cold, clammy nervousness.

When I smile up at him now, I mean it. We’re alone on a bench in the park in the big city, one among many scattered across the vast, green planet.

But at least we’re alone together. 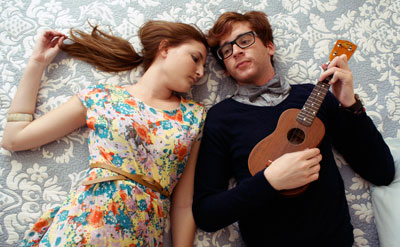 Favorite Quote:
"'For I know the plans I have for you', declares the Lord, 'plans to prosper you and not harm you, plans to give you hope and a future.'" Jeremiah 29:11. Thank you Lord, for this future you've given me.

Please take a look at my story Don't Kill Me Now? :) Please!