Nate and I never could have been just friends even if we wanted to. That doesn’t mean it had to be a romantic relationship at all, but there always has been so much more to us and I discovered that the night we met.

I remember the night we met perfectly. We were in the mosh pit for some band I don’t even remember the name of, although the name “Putrid Vomit” does come to mind, or maybe that’s just because that is what my girlfriend Alice did for the rest of the night. Alice will never learn that her stomach is sensitive enough without adding alcohol to it. Alice often takes me to all these weird concerts, that mostly suck, but as her girlfriend I feel obligated to go with her. She owes me though, big time.

I’m hanging around trying not to get a lovely mixture of beer and hooker spit vomited all over me by whatever group of idiots is behind me, when I bump into this boy next to me. I blush when I see him. He has long blonde hair, green eyes and eyelashes that are as long as a girls. He’s wearing a “To Write Love on Her Arms” T-shirt and black jeans. It’s almost forty degrees outside but his T-shirt has the sleeves cut off. He smiles at me and I see he has a silver tooth capped on the back of his teeth.

“Sorry.” He mutters and nods towards Alice. “I’m trying to get away from that chick.” I try not to laugh as I realize that Alice is doing her favorite mosh pit move “The Windmill” which is a move she made up specifically to get people away from her. Needless to say, it almost always works. I love Alice, but sometimes I just want to hit her.

“No problem.” I reply, wincing as the guitarist hits a wrong note. Or maybe it’s the right note and the song just sucks.

“These guys suck, don’t they?” The boy grins.

“Like that Asian guy from American Idol married Brittany and they had a band.” I reply.

“I’m probably going to leave soon. My buddies told me to check these guys out. This is the last time I listen to them.”

“I’m probably going to go too.” I say, trying to hint at him to take me. Obviously.

“Okay.” He says and starts to walk away and I decide to take a more direct approach. It’s been a while since I’ve been with a guy.

“Wanna go get coffee?” I ask him and he shrugs.

“Sure.” I go to my friend Jason and have him take his tongue out of some groupies throat long enough to tell him to watch Alice while I ‘go home’.

Once we are outside of the concert premises, Nate flicks out a joint and I wonder if this was such a good idea. Now that I look back, it was probably a really stupid idea to get coffee with some strange guy I just met at a heavy metal concert. My excuse is that I was twelve.

“No thanks, I don’t smoke.” I say and he shrugs and lights it up

“Do you go to Rivertown?” He then asks me.

“What grade are you in?” He asks me. I breathe a sigh of relief as we reach the streetlights. I had enough common sense back then to be nervous about being alone with a strange dude at night in the dark. God, I was so stupid!

“Oh, I’m in seventh.” He tells me as we near the Starbucks, but then he starts running toward a grassy hill next to Starbucks.

“Hey, where are you going?” I yell after him as he starts running. He runs up and jumps on a tire swing hanging from a tree. I laugh as he starts yelling, “Push me!”

“Are you insane?” I ask him and he shakes his head.

“Nope, just happy!” He yells and throws his joint to the trash can.

“You’re nuts dude.” I laugh. He spins around for a while on the tire swing then falls and hits the ground. I collapse to the ground laughing.

“Hey, look at the stars!” He says and points at the stars like they’re the third wonder of the world. I look up.

“They look really pretty.” I say.

“Do you know what I wish I could do?” He whispers to me, in a somewhat slowed voice. I smile.

“I wish I could just get a huge paint brush, and paint the sky!” He tells me and I laugh.

“You would need a pretty big paintbrush.” I tell him.

“Let’s do that someday!” He says, as excited as a little kid.

He yells like an Indian and hugs me until we both collapse on the grass.

“What’s your name?” He asks me in a hushed whisper.

“Wendy.” I whisper back.

He lays on his back and stares at the stars for a moment. 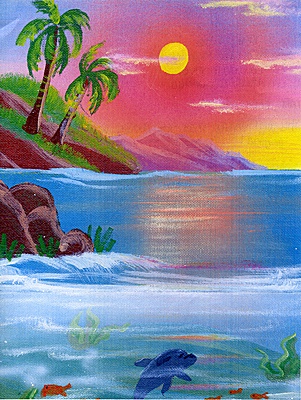 Favorite Quote:
"Character is how you live when no one is watching."

View profile
It's claire.  I like the ending--it left me wondering, and I enjoyed watching the story unfold.  My only piece of constructive critisism?  Seventh grade seems a little young to be lighting up but maybe that's just my innocent/naive nature talking.  Good piece