Left home with just a guitar and one song missing from a broken heart. He traveled on the riverbed, running fast from all he knew- two parents who expected way too much and one perfect angel brother who had everything he longed for. He ran for days and hid at nights in the bramble by the side of the road. He hungered and hurt, but he wasn't going home any time soon. Maybe never. His stubbornness kept him from giving up, his bitterness drove him farther from home. One day he realized he didn't have a clue where he was going. He shrugged and kept on walking. The old guitar was getting heavy but he wouldn't put it down. It was the one thing he had besides a longing for love. One day he met a girl named Rose. She was searching just like him, no place to call home, but she had found something he had lost long ago. He lost it in a church pew when everything become just the same old routine and words lost their meaning in a rush of confusion inside him. If God cared he wouldn't be in this mess. He told himself. She had long, flowing hair, this beautiful rose. Her heart was on her sleeve yet she was masked in a mystique as beautiful and blinding as the dawn. Her joy was like the morning though she slept on dirt and leaves by the side of a glass- strewn highway. He was intrigued by the story she carefully relayed with a look of faraway dream. She told him of her painful past with the ease and artistry of a storm-hewn poet. She had been shaped by experience, bruised and broken by the hands of others, bandaged by One he had long left behind in a house that held nothing but bitter memories and a love he never knew he would miss. It had been so long since he had seen another human being- a normal one at least, it seemed. The longing for what had once been it stirred in him was strange and nagging, and try as he might it was too hard to dispel. He watched her face turned to the breeze, her hair that blew gently over her shoulders and stretched to her waist, looked into the eyes that traversed to his and seemed to penetrate the skin. It seemed she knew him, understood him, when he hadn't said a word but to speak his name and ask her story. She asked about the guitar and a small smile touched his lips. He drew it up from the pavement and asked if she might like to hear a song. She nodded and he started to strum and pick the strings, the melody uncanny, stirring up memories and feelings he had forgotten he had. He hadn't played for months; it was just a tad out of tune, but neither seemed to mind as they sat in contemplative silence minute after minute and watched the sun just beginning to descend.
"Come, walk with me," she said, and together they walked a ways down the never-ending road they both called home. She stooped and plucked a flower that grew up through a cracks in the cement. "I love them," she said, and placed it in his hand. "They remind me of life. How God makes all things new." She smiled then- a soft and slow smile that made her face at once so subtly beautiful. They wandered back to the guitar and the one small bag she carried everywhere. They sat again in quiet stillness and the stars began to shine. There were stars out here- he'd failed to notice. He closed his eyes and listened to the silence around them. After a moment he was aware of a soft sound beside him, but he didn't open his eyes. He seemed to hear footsteps somewhere in his consciousness but he was lost in the deepest thought. After what seemed like hours or perhaps just minutes, he opened them again. She was gone. Just like that, she was gone, but she had left behind something behind. The change wasn't sudden and complete, but that day did make the difference. After a few days of wandering aimlessly, he turned around and started home. The road stretched out forever before him, but the distance was never too great to cover, and he'd run all the way.

Roses are beautiful things- they grow up right in the midst of suffering and offer beauty, a reminder of life. Perhaps they stir in us a longing for something deeper, a need we all have inside and try to fill with empty long and stretching roads. I love them- they remind me of life. How God makes everything new. 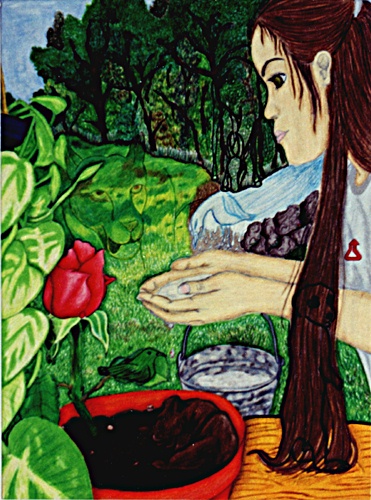 Favorite Quote:
"To love is to surpass one's self."

I love how vague and mysterious you made the characters. It really woes the readers when they have a solid, and inviting character to follow. You gave me enough to fall in love with them, yet, you made me long for more. And that's exactly what a writer's job is. So, well done.

It's also nice to see a writer who has an evident love for God. Please, don't ever lose that for anything. It's such a breath of fresh air. It inspired me to appreciate God and his creativity.