Dare You to Move part 4

I walked to class, coming in just as the bell rang, as usual. Mr. Wells glared at me as I came in, but I just shrugged innocently. Then, I spotted her. Long blonde hair and all. Some of the other girls, the cheerleaders, were gawking at her and texting each other, probably maliciously. Perfect. With them setting the mood, it would be easy for me to get to her and be nice, then turn around and B-slap her in the face.

I walked into the room and sat in my assigned seat next to Charlie Majors. He was cute, but not amazingly sexy like Gavin was. I sat down and Charlie smiled and said ‘hi’ to me, to which I smiled back and nodded.

“Did you talk to the new girl yet?” He asked me audaciously. Quite a move, Charlie Majors, quite a move.

“Oh, sort of. We were in art class and she turned around and smacked right into me. It was quite humorous, actually, I mean, the girl was talking to my boyfriend and trying to sit next to him and get to know him. It was instant karma for her to smack right into me after that.” I smirked. He looked at me strangely, almost as if he feared me. It was pretty weird to be feared, but nice. Powerful.

“Alright class, let’s begin. Today, we are going to look at examples of osmosis in nature.”

“So, wait, did she try to kiss your boyfriend?”

“No, but she would have if I hadn’t walked in and crashed her party. Whatever, it doesn’t matter. I’m going to make her regret ever coming here so it won’t matter in a couple of weeks anyway. She’ll be gone, and life will be back to normal.” I shrugged and flipped my hair as I turned to look at the white board, where Mr. Wells was drawing examples of osmosis on the board with a squeaky red marker.

After Mr. Wells had finished with his boring lesson and let us loose to do homework, I stood up and walked over towards the new girl’s desk. I leaned against it and smiled brightly and with extreme fakeness. But hopefully, she didn’t know that.

“Oh, it’s no problem. So do you need any help catching up?”

“Yah, actually. Can ya’ help me figure out this here worksheet?”

“Sure!” About that time, I looked up to see if Mr. Wells was upset that I was helping the new girl and not doing my own homework, but he was actually talking to Gavin, who was looking right at the new girl and me.

“Where are you from? Because you have one hell of an accent.”

“Oh, I grew up in Tennessee. My parents had this dream of owning a horse ranch when they got married, and they bought this hundred acre plot o’ land to start with. They had three pintos. Then when I was born, they bought two hundred acres more from the neighboring fields, and they bought eight fouls for real cheap. It all expanded from there. My sisters and brothers and I have been ranch hands since we could hold shovels and pitch hay.” I didn’t want a life story, I thought to myself, I just wanted to know where you were from.

“Cool! I’ve lived here for my whole life, well, except for the two years during fifth and sixth grade when my parents and I went backpacking through Europe.”

“Were you home schooled while you were over there?”

“No, actually, I’d been ahead of my entire class since second grade. I’d done all of my fifth and sixth grade work over breaks in the fourth grade, so I was ahead enough to take that trip.”

“Wow. That’s really awesome. I’ve always wanted to go to Italy and Spain and all. Don’t know when I plan to afford that, though.” Bridget hung her head in shame as she picked up her pencil and began to analyze the questions on the worksheet.

“Maybe someday you’ll be able to.” That was obviously more reassuring that I thought it would be, because she looked at me with bright eyes and smiled.

It took about ten minutes for us to finish the worksheet, and I told her she could take my notes to copy if she wanted to. “It’ll be easier than getting them from the teacher. He doesn’t keep track of anything.” And during that whole study session with Bridget Waters, I could feel Gavin’s eyes hot on my neck as he watched us work. I wasn’t sure who is was paying closer attention to: me or Bridget.


I sat in the waiting room of the hospital and listened intently to the intercom. Not really for news about Jaime, but more for just something to listen to. “Doctor Hotchkiss, you are needed in the NICU.” “Can Miss Anna Rison please go to the nearest service phone or help desk?” “The Dutch family is needed in the emergency wing for John Dutch immediately.” Meanwhile, I prayed silently for the person that the doctors or families were being called to see. I hoped they would all live, or if they died, they would end up in Heaven with the Lord.

My mom came out from the hallway after talking to Jaime’s parents. She looked a little bit annoyed, but I knew that she wouldn’t do anything to me because she knew how hard it was for me to have a best friend dying of cancer.

“I was just going to tell you that I know how hard this is, but you need to be more sympathetic. Jaime was just trying to tell you the truth about his current situation. So if you could be a little but better to your best friend, that would really make the world would little bit of a better place. Okay?” She put her arm around my shoulder and pulled me closer. I leaned in and put my head on her shoulder, but inside I wanted to go back into the room and hug Jaime, tell him that I was terribly sorry.

Mom got up to go get something from the McDonald’s down the street, and I decided to stay in the waiting room so I could go back to Jaime’s room if I wanted to. She kissed me on the head as she stood up and walked out of those double doors.

I sat there and closed my eyes, letting the sunlight from the giant windows flood my face. The warmth made me think of all those summer days spent at Rutherford Park, a big park near my house. Jaime’s mom, Lucy, would drop him off at the curb at the bottom of the street and I would come running out of the house, my beach bag full of Frisbees, a basketball, sidewalk chalk, sunscreen, and other toys to use down at Rutherford. We alternated the money supply so that we could buy each other ice cream cones. But one summer afternoon really stuck out to me, and I began to fall into dream land with the sun on my face and my head resting on the back of the chair.

“Jaime!” I cried as I looked around the swing set for him. We were playing Hide-and-Go-Seek, and there was no sign that Jaime had even been down here. “Olly-olly-oxen free!” Silence. “Jaime, I can’t find you to save my life! Come out, please!” Silence again. I sighed as I plopped myself down on the swings and began to sway forward and backward. Suddenly, I was jerked from the back of the swing and thrown over someone’s shoulder. “Help! Help me!” I cried and kicked and screamed. There was only one other family there at the park that day, and the woman was so busy with three toddlers and two babies, all of whom were screaming bloody murder, that she didn’t hear or see me. “Help me!”

The person who snatched me was running fast down the sidewalk and out of the park. I knew there was no hope for me, that I was going to be thrown into the back of a car and killed or tortured, like in the movies. I didn’t want to end up like the kids in those movies.

“Hey! What do you think you’re doing!” a familiar voice said from close by, and I felt the figure stop abruptly. “That’s my friend!” Jaime, I thought, thank God you found me! We kicked and pounded the person carrying me, and finally, after Jaime kicked him hard in the shin, the person dropped me on my butt and ran for the a car on the street.

“Yah, I guess. But my butt hurts.” Jaime smiled and looked me up and down for bruises and cuts. Aside from a scratched up hand and a bruised thigh muscle, I was okay.

“We should go on to your house now. This is kind of freaking me out a little, you being kidnapped and all.” He smiled at me, for which I melted like I always used to around him, and piled up my stuff. We never went to Rutherford Park again.

By the time I’d woken up from my little day-dream, Mom was back with chicken nuggets and French fries, so I ate before deciding to go back into the room to see him again.

I knocked twice and opened the door a pinch before going in.

“I thought you hated me,” he said as I sat down on the edge of his bed and took his hand, his shriveled, tiny hand.

“Shh.” Jaime put his finger to his chapped lips and closed his eyes. “I know that I’m dying. You know it, too. I think that we just don’t want to understand it or make it happen, you know?” He smiled, and I smiled back. As it did when I was seven, his smile melted my heart until it became a mushy lump beating in my chest. 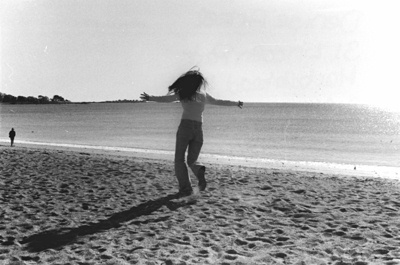