I stood outside, the slight chill in the air rippling across my bare arms and giving me goose-bumps. I shivered a little, but even that scared the one I was trying so desperately to observe. It had lived near my house for a while now, and I had wanted to get to know it better. The ‘it’ in question was a small, red fox, her belly heavy with kits.
“Come here,” I whispered, my hand extended towards the shy animal. She flinched and retreated into the relative safety of a bush.
“Sam!” My aunt barked, “It’s time to come inside for dinner!”
“I’ll be back,” I promised to the small red fox. “I just have to leave for a little while. Next time we go into town, I’ll bring back some good food for you.” At that time I lived with my aunt, uncle, and three cousins at their house in rural Wisconsin.
“Hey! Sa-am! Get your butt in here! Dinner’s ready!” Sarabeth, my fourteen-year-old cousin, yelled.
“I’m coming, sheesh!” I replied, rolling my eyes where they couldn’t see me. My aunt and uncle were really strict, and I still wasn’t used to it. I walked reluctantly inside, pulling a large sweatshirt over my clingy top so I wouldn’t catch s*** about that as well. Aunt Mildred and Uncle Carson were already mad about my earrings (two in my left ear, one in the right) and my attitude; I didn’t want a reason to catch more flak from them.
“Sammie! You’re back!” Marlene grinned, her missing teeth and dimples only adding to her charm.
“Of course, did you think I’d leave?” I ruffled her head full of curls and arranged her napkin properly on her lap.
“No, I just thought you’d stand outside watching that little fox all day,” she said innocently, spooning peas from her plate to her mouth.
“Marlene!” Aunt Mildred chided. “We haven’t said grace yet! And what is this about a fox?” She turned to me with narrowed eyes. “I thought I told you to stay away from that beast. You might catch rabies, and it wouldn’t do any good for anyone to gossip about odd things you do. There are already rumors about you, you know.”
“Yeah, Sam,” Sarabeth interjected. “Be more like the rest of us. You’re too weird the way you are. It isn’t right.”
“Duh,” Malachi snorted. “Miss Marvins from church says that if you don’t listen to the reverend and believe in God and act like a witch instead, you’re going to hell.”
“Malachi!” Gasped Marlene. “That’s not a nice word! And calling Sammie a witch is a sin.”
‘It’s fine, Marlene,” I hissed, rising from my chair. “A word of advice? Sarabeth, stop acting like a b**** just because you’re in eighth grade now. And Malachi? There’s a hell for the fake pious like you.”
“Samantha!” Uncle Carson thundered. “Do not talk like that in my house! I took you in, fed you, clothed you-“
“It’s not like you had a choice,” I spat out. “When my parents were murdered, there was nowhere else to go! It would’ve stained your precious reputation if you turned away a homeless relative; that’s the only reason you took me in. Do you think I wanted to live with people like you? I’d rather have lived on the streets! At least there, I wouldn’t have any illusions, like the fake dreams you’re feeding these children! Life doesn’t go exactly how you want it to if you just say your prayers and go to church every Sunday like you’re saying!” I shoved my chair into the table, kissed Marlene’s forehead, and marched out to the protests of my relatives.
“It’s definitely a good thing I always keep everything I need in my pockets,” I muttered. I kept walking deep into the forest. I didn’t know what I was trying to do, only that I needed to get as far away from that house as possible. I hiked until the dusky sky had turned to a velvet curtain, and the black forest was the stage. Eventually, I sat down and pulled a granola bar from my pocket.
“Well, I wonder what’ll happen next.” I sighed. “They won’t search for me when I leave; they’ll just tell their friends that I went back to Wyoming and go on with their lives.” I turned to look at the corner of the clearing where a flash of red had caught my eye. I saw the fox, and waited for her to come to me. When she did, I let her warmth soothe me and thought about what to do next.
“I can do what I want,” I murmured. “But I guess for now I’ll stay with you. Is that ok?” I looked down to see her staring with wide, amber eyes. “We’ll get through this together, whatever ‘this’ is.” I’ll admit, I felt a little ridiculous talking to an animal like that; but I didn’t have anything else to trust.
“We’ll make it through this together,” I repeated softly, staring at the pinprick stars in the night sky. “We’ll make it through this together.” 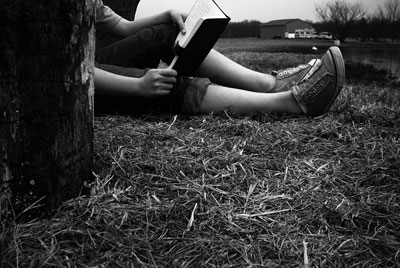 The author's comments:
Wrote this when I was bored. I'm not too proud of it, but the teacher liked it.
Post a comment
Submit your own