Jeanie walked out of the dust-bitten door without closing it against the arid wind. She looked to the sky, only recognizing the night stars as scattered, flickering embers of what was once bright and beautiful. Her sandals dragged in the dirt. Her gnarly toenails painted themselves orange with it.

“No place left to go,” Jeanie said to no one. “There are no more roofs on the earth.”

There was still dust in the air, even though it happened hours ago. No doubt, Jeanie wore dust like a second skin already--her gaunt, brown face was tinted a grey, alien color. Jeanie didn’t need to see her reflection to know. She already felt like an alien. Or a vagrant spirit, strolling down an avenue of fire and destruction. Homes and second-homes lay smoldering and askew on the sides of her road. So did some people. Family and second-family. Hands reached out from under crumbled stone and brick. There was no saving anyone.

Jeanie walked faster. Her right sandal finally broke. The plastic toe-strap popped out from under its bloody and orange and neon green foam bed, and she had to stop in the middle of the deserted road to fix it.

A hundred paces later, she had to fix it again.

The stars shone brighter through the settling of the dust. Now, Jeanie could see that the sky was a deep blue, if she looked hard enough. On the horizon’s rim, where stars also dwelled, grey was creeping up the sides.

Jeanie kept walking, fixing, walking. What else was she to do? War had left her eight-year-old and malnourished legs only one thing to walk toward: hope. But her hope was running dry. Her eyes ran wet. Under the starlight, her tears were black with dust.

The road sloped upwards, still carrying the crumbled roofs with it. Jeanie’s legs felt hard and flimsy at the same time, but she pushed onwards. She gasped in clear air at the top of the hill, and looked down the opposite slope.

There were stars on the roads. She could see them all from where she stood, twin headlights illuminating the orange dirt that shot up insolently from under their wheels. Souls. She didn’t know who they were. She didn’t know what they would do. But she had hope, rising up with the greying of the night sky.

Jeanie ran down the slope. She couldn’t stop to fix her shoe. 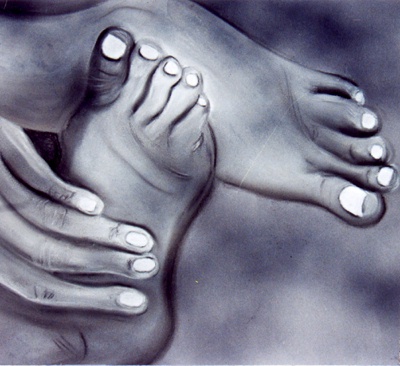