The teacher is new. She is a substitute. She writes that word on the blackboard when she arrives.

Today, she says we are making mugs for Mother’s Day. They are white and will say WORLD’S BEST MOM on the side. Some kids can’t read it, but I can. Dad’s been teaching me. I can read The Magic School Bus by myself now.

When the new teacher tries to give me a mug, I tell her I don’t want one. She squints her eyes at me. “I’m sorry, what was your name?”

I am ready to say, “Because my mom doesn’t live with us anymore and she left two years ago and Dad said he doesn’t know where she is, so I won’t be able to give her a mug.” But the teacher is looking at me the way Dad looks at Snowy when he does his business on the carpet instead of in the bushes outside. And next to me, Amelia is already gluing pink flowers all over her mug, and I wanna do that too, and it doesn’t seem fair that she gets a mug and a mom and I don’t get either.

So I squint my eyes back at the teacher and take a mug out of her hands and say, “Never mind.”

I decorate my mug with fourteen pink flowers, and Amelia only put on nine. And I add some blue shiny stars too.

When I am walking out of the classroom with the mug in my hand, I think of a day, a long time ago, when I was four. Mom came home from work and gave Dad a chocolate bar and me a lollipop. And Dad was confused because he and Mom had been mad at each other the day before. But he wasn’t mad anymore because she gave him chocolate, I guess. He was happy and surprised and he picked Mom up and tried to spin her around but he almost dropped her and I fell off the couch because I was laughing so hard.

So when Dad picks me up after school, I hide the mug at the bottom of my backpack because I remember how much he loves surprises. I wait until we’re home and when he goes into the kitchen to get a snack I put the cup on the kitchen table. But two of the flowers have fallen off so I have to run to the other room to get a glue stick, and when I get back Dad is sitting at the kitchen table holding the cup.

And then I think about crying because I wanted to see his expression when I gave it to him and now I missed it. But I don’t cry because my seventh birthday was four days ago and I haven’t cried since I turned seven so I’m pretty sure seven-year-olds don’t cry, and I don’t want to ruin it.

Dad’s face was blank and still, but now it folds in on itself like paper. He stands up and his chair rocks backward like it’s going to fall. “Did Ms. Gibson make you do this? I thought she knew! God!” His face is bright pink and his voice is getting louder. “I swear to God, that b*tch—“

“Dad!” I have to yell because he’s really loud now and I’m scared and want him to stop talking. But I don’t want him to know that I’m scared so I yell louder than him because I know that’s what Dad does when he wants me to shut up.

“Dad! Ms. Gibson wasn’t there, it was a constitute. Or, no, a substitute. I just wanted to make you a mug.”

Dad just stands there next to the table and looks from me to the mug in his hand. I worry suddenly that he hates it because the flowers are pink. Maybe I made it look too much like a girl mug.

But Mom would have loved that mug.

But Dad beats me to it. 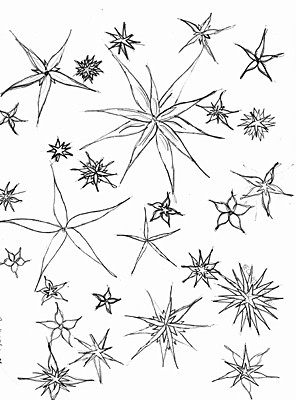 Favorite Quote:
"Jesus looked at them and said, 'With man this is impossible, but not with God; all things are possible with God.'" -Mark 10:27

Favorite Quote:
"We were given two hands to hold, two legs to walk, two ears to hear, and two eyes to see; but only one heart because the other one was given to someone for us to find." ~Unknown

Favorite Quote:
“With freedom, flowers, books, and the moon, who could not be perfectly happy?”
― Oscar Wilde, De Profundis

Favorite Quote:
take the sad, lonely things in life and make them into something beautiful.