Musings of an Introspective Soldier

Private Rylan carried the moon in his pocket like a silver dollar, feeling its coolness in the folds of his calloused hands during the day and employing it as a beacon during the night. A porous wooden cross, which kept him buoyant during tempestuous tides, hung pendulously from his bulging neck on a rope that could moor him to the dock of reality or act as a noose depending on the weather. He used to keep a grain of salt weighing .064799 grams in his breast pocket for preservation. It dissolved in the monsoon. At the bottom of his backpack lay a dead 4-leaf clover, a blurry photograph, and a corked bottle containing evaporated hope and a note saying “see you soon” signed Graham O. Donald.

I haven't a clue how long it's been since I've seen you last, and He only knows if we'll meet again. I like to imagine that our reactive souls will coalesce into a supernova upon our reunion, momentarily outshining the entire galaxy. Until then, I suppose I'll tell you how I came to be Here that July of 1960.

While nocturnally humping* through the jungles of Nam, my platoon came across the scorched remains of an enemy village. Vietnamese gunfire disrupted the continuum. Lead bullets glinted in the moonlight before disseminating unalloyed agony across my torso, and I relinquished myself to gravity's pull. Sprawled upon the cinders, I observed the night sky as He tallied the casualties with evanescent chalk. A sense of artificial cool engulfed my being despite the burning pain, feeling like aloe salve on a blistered back. I looked towards His celestial domain with eyes wide shut and smiled, my teeth like ivory piano keys playing a melodic accompaniment for the metronomically chirping crickets. Besides the leisurely rise and fall of my abdomen, I remained a fixed object beneath the spinning stars. I clasped my wooden cross, grazing with the pad of my trembling forefinger His engraved words: “you are dust, and to dust you shall return.” My gaze settled on the ground, where green plumules resurrected from the fertilizing ashes, revitalized and determined. It was then that I understood the transience of physical mortality. I realized that in the limbo called war there are two pathways to life: survival and rejuvenation by virtue of disintegration. The air suddenly solidified, weighing down on my supine form. My chest labored to counteract the pressure, but weakened with each futile attempt at expansion. My consciousness diffused towards my crown, where it found comfort and calm. Beguiled by the promise of numbness, my weary eyes found solace in my skull, and my devitalized body stilled. When the shower had ceased, my soul continued humping, carrying with it a corked bottle of newly condensed hope and pellucid serenity. On the horizon stood Graham O. Donald, holding a banner that read “Welcome home.”

Stars are the sirens of the night. They seduced me with their flamboyant incandescence and prominence, luring me to my somatic demise like a moth to a lamp. The flag to which I pledged my allegiance shrouded my stiffening body, its patronizing stars levitating above a blood stained soil divested of virginity.

*humping is soldier slang for hiking 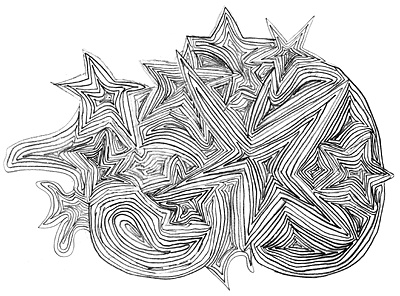 ?A porous wooden cross hung pendulously from his bulging neck on a rope that could moor him to the dock of reality or act as a noose depending on the weather.? [Note: This story is set in the jungles of Vietnam during the 1960s.]

Inspired by Tim O'Brien's novel "The Things They Carried"

Democracy... while it lasts is more bloody than either aristocracy or monarchy. Remember, democracy never lasts long. It soon wastes, exhausts, and murders itself. There is never a democracy that did not commit suicide.
John Ada