The car was silent. Aimee brushed her short black hair out of her face and looked over at her dad. He was driving, much faster then he should have been. She went back to looking out the window and watched the cars rushing by as they headed into New York City.

"So, how's school been going?" her dad asked. He looked over at Aimee, then focused his eyes back on the road.

Aimee could feel her father's eyes roaming her in small snatches. She heard him grunt with disapproval and knew he was looking at her new nose piercing. She felt his distasteful gaze at her new black hair and black ensemble. She could feel the disappointment coming from him in waves, almost as if they were crashing against her. She knew that she wasn't what her father had expected.

"Are you excited?" he asked.

"About what?" Aimee continued to stare out the window.

"About seeing the Twin Towers," he said. "About seeing where your father works. We can go up to the top floor and eat breakfast. You know, if you want to."

The silence intervened again until they reached the towers. Aimee's father pulled into spot and turned off the ignition. Neither of them made any move to get out of the car.

"We need to talk Aimee," her father said.

"Then why did you come with me to work, Aimee?"

Aimee watched without much interest as her dad pounded the wheel in frustration.

"So that's the only reason you came with me?" her father shouted. "Because your mother made you? I'm your father, you should want to spend time with me!"

"And you wonder why I don't?" Aimee yelled back at her father. "All we ever do when we spend time together is yell at each other. And you wanna know why?"

"Yes," her father said, even more angry then before. "Please, enlighten me."

"It's because you hate me!"

Her father looked over at her, opened his mouth, but no words came out.

"That's what I thought," she said.

Aimee opened the door of the car, got out, and headed towards the elevator with her father trailing along behind her. They both got in the elevator and the doors slid together in silence.

Aimee pressed the button while her father tried to think of any words. He opened his mouth, but no sound came out, and he decided not to answer. They took the quick ride all the way to the top of the tower, neither one saying a word, the pressure in the small space almost palpable.
**************************

“I will have two sun side-up eggs with a side of bacon with some coffee, please?” her father said. He handed the menu back to the waitress and looked over at Aimee, who was gazing out one of the large windows all around the top floor.

“I will have some French toast and orange juice,” she said, not looking at the waitress. The waitress walked away with the menus and Aimee went back to staring out the window.

“We really need to talk.”
Aimee looked back at her father, surprised he had spoken so bluntly. He was more the person to ignore a problem rather than admit it even existed.

“I don’t feel like there is any problem here,” she said. “And even if there was, why would I talk to you about it?”

“Because I am your father.”

“Oh, really?” she said. “I thought fathers were supposed to be home more often than not. I thought fathers remembered their daughter’s birthday. And I pretty friggin’ sure that fathers don’t cheat on mothers and leave in the middle of the night!”

“You don’t know my side of the story!” he yelled back.

“Then please tell me.”

By now they were both shouting, but no one seemed to be paying attention. Most of the people in the restaurant were on cell phones and all of them looked panicked.

“Aww, poor you,” she said. “Most people in this world are unhappy. You just happened to be one of those selfish b*****ds who decided to ruin other people’s lives to make yourself happy.”

“How should I talk to you, then?” she screamed. “Like I respect you? Because I don’t!”

“What are you guys still doing here?”

Aimee and her father looked away from each other to a security guard bearing down on them. He looked panicked, but also angry at them.

“What do you mean?” her father asked.

“You need to evacuate,” he said while pushing both of them towards the stairs. “The other tower was just hit by an airplane.”

“Wish I was,” he said. “But ten minutes ago a plane hit one of the higher floors of the other twin tower. We’re evacuating this one just in case.”

Aimee looked over at her father, and saw the same fear she felt in herself. She enveloped herself in her father’s arms and he began to stroke her back.

“And I don’t think you’re stupid,” he said and they both laughed.

“I love you too sweetheart.”

They all heard a sound and looked out the window to see a plane heading in their direction, about two floors below them. 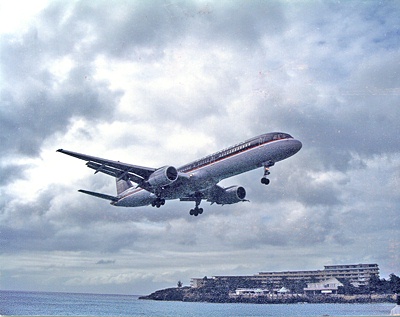 The author's comments:
This story is a fictional piece about a father and his daughter who were in the restaurant on the top floor of the second of the twin towers on the day they were attacked.
Post a comment
Submit your own