Daddy walked into the house, he looked so angry it frightened me. Storming around all purple in the face and going on and on about my school and something about “those damn negroes.” I didn’t understand, Mama came out looking worried and asked him what the fuss was all about. He sat down and deflated right there, his face visibly going back to a less frightening shade of angry. Still shaking he began to explain how the state was ordering that nine colored students were to attend my school, Central High, along with us white students. Mama’s lips pursed and I felt my jaw drop. Black kids, in the same school as I? It seemed so far-fetched, I had a fleeting thought that someone was pulling my father’s leg. But no, that couldn’t be it. I didn’t know anyone around here who would joke about such things…not in Little Rock. That is when it hit me, the whole town must be just as angry as my Daddy. I wish I could have deciphered my Mama’s face. She just sat there, calm and collected, her face gave nothing away. Those pursed lips could mean anything. I couldn’t bring myself to say a word. I certainly couldn’t bring myself to say that I didn’t mind it.
Really the thought kind of excited me. I’m not sure why. But I had never been given any reason to believe that the black kids were any different than my friends and I. As far as I had ever seen they too drank Coke, enjoyed music and movies, and had a carefree time enjoying life…like any other teens I had ever encountered. Only, they had to do it in separate areas from us whites. Daddy had always made it plain that such things were natural, that it was supposed to be that way. I had never really seen why they should have to be that way, but Daddy and his ways were law in our house, not to be defied or challenged.
When the day came that the blacks were supposed to come to my school Daddy wouldn’t let me out of the house. He said there was no way he would let me near that angry crowd, one which he would be a part of…and the day he let me go to school with blacks would be the day hell froze over. I didn’t bother arguing. I knew how hard-headed Daddy was. Mama didn’t go either, Daddy asked her to come and “support the cause” but she just shook her head and kissed him goodbye at the door. I didn’t ask her why she didn’t go…I had an idea that maybe she thought the same things as I did, but I didn’t ask her that either. I just went to my bedroom and tidied up for awhile. I wished I were in school doing something more productive, with my friends. I figured my friends were down there by the school alongside their parents, just as angry as my father was.
The governor is just as bad as any of those angry folks down at the school. My friend, Mary, came by in the afternoon to fill me in on all the details. Governor Faubus is trying to stop the black students by using the Arkansas National Guard to make them turn around. She said they pointed guns in their faces and told them to go home. I thought it was sad. One of the black girls wasn’t with the rest of the group, Mary told me how she came later and how she must have thought the National Guardsmen were there to help her because she walked right up to them and then they pointed their guns in her face and told her to go home too. Mary said she thought the girl might have been crying. I was sick of hearing everyone call them “those blacks,” “those negroes,” “that one”…didn’t they have names just like Mary and I did?
The next day I turned on the news and found out they did have names. Their names were Ernest Green, Elizabeth Eckford, Jefferson Thomas, Terrence Roberts, Carlotta Walls, Minnijean Brown,Gloria Ray,Thelma Mothershed, and Melba Pattillo.
And they were being helped by a Daisy Bates. I don’t see how she wasn’t just like any other woman…except she was standing up to people for something she believed in unlike my mother and I who sat by with averted gazes as he rambled on and on about how “us whites” were better than “any ol’ negro.”

REFLECTING…
Soon enough, President Eisenhower intervened and sent federal troops to my school to escort the students inside. Governor Faubus was so angry that he closed down all of Arkansas school’s the next year. I thought it childish of him, and felt he was a stupid man. If he really thought so much about white people than why would he bring himself so low? He wasn’t just punishing those nine black students by closing the schools, he was punishing all the students of Arkansas, myself included. Daddy stood by the Governor and his decisions, I began to think my father was a stupid man too.
I never really spoke up to my father. However, I did ask to be sent north to finish my schooling and he obliged. “ I am sorry that you had to go through this honey.”; He said. ”Just because them blacks can’t stay in their place, they had to go and cause trouble, now my baby has to suffer.” ;he continued. I just kept my mouth shut, feeling disturbed that I didn’t like him calling me his baby anymore. He said he wasn’t sure if sending me north was a good idea. “ Them northerners is just as bad as them blacks, trying for all their equality, what a bunch of hogwash…”; he told me. But Mama talked to him and eventually he obliged. When I arrived in my new school, I found out I would be classmates with black students. I didn’t mind. I had a chance to start over here. I knew Daddy would never understand with his hard-headed ways, but I decided to accept him as he was…the way he could never accept black people. Many of those nine students were a lot like me after the incident. They had to travel in order to finish their schooling on time as well. I felt disappointed that I could no longer find comfort among people who were once my friends because I had seen them for the type of people they truly are. I have learned that you find out a person’s true colors in times of trouble, not times of peace. I have learned that I do not have to go with the norm. I can make a difference. I regret never speaking up to my father but I feel that I helped in my own little way by not giving in to Daddy, and Governor Faubus, and all the other people like them. 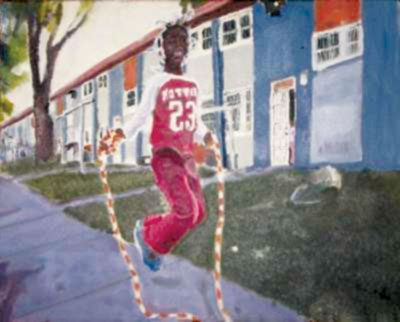 Favorite Quote:
"Momma always told me, life is like a box of chocolates, you never know what you're going to get" by:Forrest Gump

View profile
That was really well done, you did a great job, the end was verry good.