Favorite Quote:
"Reach for the stars, even if you have to stand on a cactus."
- Susan Longacre

Yet another pink blossom fluttered to the ground. The fall was slowed by the playful wind, tossing the flower this way and that, before finally deciding to let it fall. The blossom landed next to a cottage, an aged cottage, but one that was beautiful nonetheless. White, freckled lilies lay proudly on the windowsill, waiting to be admired by all who happened to pass by. The unmistakable scent of gingerbread filled the air and was quite a welcome change from the almost overwhelming scent of the spring flowers. The roof was so red it was as if a pile of rubies had spilled down upon it. Wisps of smoke slowly blew out from the chimney, calm and steadfast. As far as doors go, this one was quite unusual. It had a cartoonish look about it; the door was rounded in an old-fashioned way that wasn’t often seen. Even the doorknob was odd. Its polished, bronze color gave it the sense of being taken care of. Which was, quite frankly, a little odd. In today’s busy times, whose life was so eerily perfect that they had time to water their lilies or polish doorknobs?
Beneath the whistling of the wind, there was a soft, but almost rickety sound. If you listened closely, you would realize that the sound was coming from a rocking chair- inside the house. Eyes closed, the elderly woman rocked back and forth on her chair. Her frail hands gripped the smooth, maple wood lightly. Her bun was done in a way that was so tight, it was hard to believe she didn’t have a headache. Helena’s white blouse was plain and practical, not containing but a single wrinkle. Smelling the gingerbread, Helena knew she had to get up. She was in a rotten mood as it was and the last thing she needed was burnt bread. Sighing, she put on her pink slippers and dragged her feet to the kitchen. Carefully putting on her gloves, she removed the brown bread from the oven.
“Richard,” the old woman called, urgently. “The bread is ready!”
“Yes, dear,” he replied half-heartedly. There was no doubt about it; he was watching golf.
Rolling her eyes good-naturedly, Helena decided to return to her rocking chair. It may have been spring, but it was unusually chilly. Mumbling to herself, she pulled her robe tighter around her. Sitting down again, her eyes connected with it. The photo above the fireplace was so beautiful her heart wept. She stood up and blew the dust off, once again returning it to perfection.
“A little bit of dust won’t hurt it, Helena,” murmured Richard, making Helena jump.
“I know,” she said, sighing. Her eyes returned to the picture. “Does it ever get easier?”
Richard grimaced and forced out a smile. “Eventually. It has to.”
Defeated, Helena sat back down and ran her hands over the comforting texture of the chair. It was flawless.
At that moment, the wind picked up, setting off the golden wind chimes attached to the cottage. Although small in size, the instrument continued to echo throughout the distance. Not too far away, another blossom trickled off the tree, like a silver necklace losing its luster. Blue birds perched on the roof, not at all startled by the coldness of the wind. They listened, fascinated, by the golden object that continued to chime without taking notice of them.
On the side of the house, the lush bush had finally grown a strawberry or two. Although the first didn’t quite yet match the ruby color of the roof, it was still ripe enough to pick. To Richard, the small delicacies were a lovely treat, bringing back far away memories of him picking strawberries with his hands stained red. To Helena, they brought back memories of loss, so they tasted bitter, the very flavor of sorrow.
Without warning, the wind ceased. The ruffling of the evergreen grass stopped, along with the sound of the chimes. But the rocking chair remained the same, for nothing stayed quiet for long near the cottage made of cobblestone. 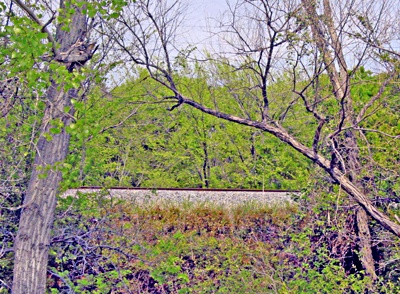