My name is Natasha. Once, before I was born, my mom and dad had a puppy named Sam. He was a golden retriever. On his first Christmas, my mom gave him an ornament. It was a puppy on a candy cane with a dog tag that said “91” because it was 1991. After my baby brother was born, Sam died. Whenever I look at that ornament, I think of Sam.

Now it is 2005. I still remember Sam. I had just set up my Christmas tree. It was 3:00 in the morning on Christmas day. I went downstairs to see if Santa had come. I ran down the stairs. I accidentally hit the tree and the puppy ornament fell off.
“Oh No,” I said “I broke the puppy ornament!”
I started to go back to bed very sad. Then I heard a “POOF” sound. I turned around. A bright light shone in my eyes. Then I saw the ornament, only it was life-size!

“Now come with me.” He said.
“Where are we going? I asked.
“To a place that I know you will love.” He told me to get my coat and gloves and meet him outside.

When I went outside, he told me, “Think of the happiest thing ever.”
So I did. Suddenly, I started to float in the air! Then I started flying! The puppy held my hand and gave me a piece of the candy cane he was holding. I ate it as we flew. We went past the highest clouds. Then I saw something that looked like gates. It was heaven. No, it couldn’t be, could it?
“91” opened the gates and said, “Welcome to heaven!” At first, I didn’t see anything behind the gates but when “91” opened them, I could see lots of things.

Then we went over to the zoo. It was filled with animals that had died. Then I saw the pet section and guess what?! I saw Sam right in the front!
“Sam!” I yelled. I hugged him very, very tight! Then all the dogs tackled me. By the time I got out of the doggie pile, I had to go. I said goodbye to Sam and I got a picture with all the dogs.
Before I left, “91” said, “What do you want to do next?”
“I know,” I said, “let’s go to the North Pole!”
“Excellent choice,” he said, “because they have a new place at the North Pole where you can see all the nativity sets of the world.”

“Wow,” I said, “let’s go!”
“OK,” he said. So we flew straight down and in a second we were there. We walked around and saw lots of nativity scenes. Then, in the very back of the room, there was someone that I thought I would never see in real life. It was the real Santa Claus and in front of a really big nativity scene.
I whispered in his ear what I wanted for Christmas. “All I want for Christmas is a puppy,” I said.
He said, “Ho, ho, ho, that’s a big wish, Natasha!”
“If you can’t get me a dog,” I said, “then I would like a doll with a toy dog.”
“I could probably get you that,” he said.
“I also want to go home,” I said.
“Now I can get you that!”
So the dog and I went into Santa’s sleigh and we sailed off into the dark, snowy night.
When I got home, “91” said, “What about the ornament? It’s broken and some time your parents will find out.”
“Oh, my gosh, I forgot about it. Help me put it back together. Hurry!”
“You won’t have to,” he said.
“Why?” I asked.

The next morning, as I opened my presents, I looked at the ornament. It winked! My parents never knew about the broken ornament and my one minute Christmas adventure! 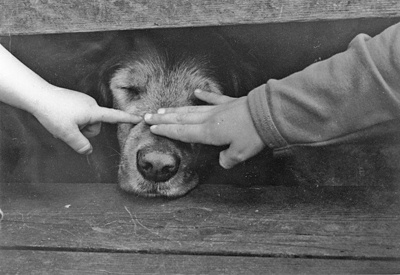 The author's comments:
I wrote this story in 2005. The beginning part, about a dog named Sam, is actually true. I did have a dog named Sam. The whole concept of this assignment, was to right a story about an ornament on your christmas tree. And i do have an ornament like that.
Post a comment
Submit your own