Alisa knows it’s morning when she wakes up. Rays of faint light from the glowing flame in the sky pierce through the layer of canopies into her eyes. She stares at the slowly darkening sky and feels with her senses again. She can hear her own ragged, uneven breathing; smell the strange fragrance of the sweet blossoms; and taste the blood as bitter as old coins in her mouth. She jerks up, finds herself lying amid giant trees. She doesn’t know how long it’s been after the plane had crashed into this foreign region. The sun is setting, yet more creatures are becoming increasingly visible: millions of ants marching along the crooked trunk, a strange looking caterpillar meditating on a dandelion, and an army of bees attacking a budding flower. A squirrel-like rodent crawls out of its habitat, gazing curiously at her. She stares at the stunning creature with wonder. Suddenly, hearing her brother’s calling in the distance, she turns and quickly paces towards where the sound comes from. Behind her, the troop of ants gradually fades into darkness, the caterpillar greedily devours the plant, and the flower is torn into pieces. Even the agouti conceals itself in the burrows among the roots.

“Alisa! There you are! I was looking for you for so long!” Jason gestures.

She feels relieved seeing these familiar faces. Their companion Pedro has started a fire using dry wood and rotten leaves. Ripe yuccas are cooked on the fire, beside them are games Pedro gathered.

“We can’t stay in the jungle overnight—too dangerous—we need to get out of here as soon as possible before it’s completely dark.” Pedro seems a little worried, but he brushes his uneasiness away quickly, as they ate their foraged food.

They depart from where they temporarily perched. Leading the way as usual, Pedro keeps hacking away with his machete, occasionally stopping to figure out the way. They tromp up and down hills, along rivers, and over some vine-covered logs. After a while, Pedro becomes perplexed. He looks to his right and his left, mumbles a series of words to himself.

“Are we lost?” Jason inquires.

“Yes, but I just need a few minutes,” Pedro insists but looks unsure.

Every landmark looks the same as the last, trees and vines making up most of the forest. Hours pass. They are still walking around like animals trapped helplessly in a pitfall. Alisa suddenly realizes something and is about to utter it when all of a sudden, they hear a thundering roar. From a dense, nearby bush, a gigantic jaguar leaps out swiftly and lands in front of them. It is covered in rosette patterns, and it is the size of a van. The spotted cat positions itself to attack.

It’s strange. Rather than panicking or being scared, Alisa feels a bit of rush. A shout of surprise pours out of her throat as the jaguar hurls itself at her, its eyes fixed on her. A blink after, the humongous beast is now on top of her. She can feel the razor-sharp teeth against her neck. Yelling and writhing around wildly with all her strength, she grows more desperate as the jaguar rips open her skin and more blood drip down. She knows the longer the struggle lasts, the less hope there is for her to live. She punches and stabs restlessly, using whatever she can find as weapons. Blood spills everywhere; she only wants to live. She can’t give up. She doesn’t want to die. She needs to live. With an even louder shriek, she is invigorated again. Alisa punches and scratches fiercely, concentrating on the jaguar’s nose and eyes like a machine that never gets tired. At last, a machete pierces through the Jaguar's rear leg. With a roar mixed with grunts, the jaguar flees in pain and disappears into the undergrowth.

Alisa is drenched in sweat and blood, dehydration and fear strike her hard. Barely hearing a word, she drowns in endless darkness. Jason lies beside her, unconscious, but Pedro is nowhere to be seen. Fatigue is dragging her as she tries to pronounce a word. She realizes that the jungle isn’t what she imagined it to be; it has just shown her a different aspect.

She hears a squeaky sound beside her. With her last strength, she reaches out and catches something furry. It’s an animal. It’s a wounded agouti. It’s food. The thought makes her stomach grumble. The fight took all her strength. The fight didn’t leave them with any food. She rips open the animal with her bare hands. She is drenched by a river of blood, but she doesn’t care. All she cares about is tearing it apart, gobbling, and devouring the guts and meat she desires.

She stops after consuming half of the animal. She has to save it for Jason. He must be tired after the fight. They have a long way to go. She thinks to herself as she hides Jason underneath an enormous canopy of banana leaves.

It’s all like a dream. Yesterday, she was still imagining being with her crush, and just now, she almost died fighting a ferocious jaguar. She was weak but not anymore, because she feels much empowered after the furious fight and especially after munching the agouti. But then she remembers the time when she first saw an agouti. Its diamond-like eyes had been looking straight into her soul. Suddenly, she feels a surge of confusion. She never kills. How could she! But she has to live, so does Jason. She moves gently toward the other who has fallen asleep. He has a deep gash in his upper chest, blood cascading down his body in a stream.

She glances out from the layer of leaves where she has concealed herself. The jungle is dark and dipped in shadows. There is absolutely no light, none that she can see. The sound in the nighttime wilderness is unnerving. The buzzing of insects and the cracking of branches slowly merge together. Among the sounds, she hears the burbling stream as she gradually falls asleep, feeling relieved. Beside her, the blood-stained machete is still dripping blood onto the grass. 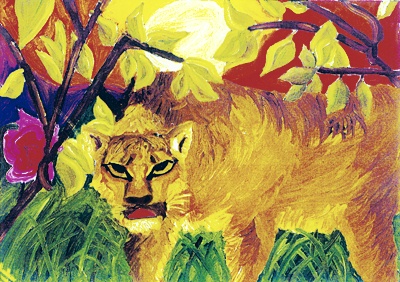